On 27th may Parma Calcio celebrated its third promotion in a row: now The Crociati are in Serie A. Here is what some of Parma Calcio players and members of board said during the party at Tardini Stadium.

“The first goal, three years ago? No one wanted to kick that penalty, so I did it”, said Riccardo Musetti, who scored the Parma Calcio 1913 first goal of its history.

Fabio Lauria, on that first season, scored an astonishing goal against Romagna Centro: “It’s a great honour for me to be here, this is a dream. That amazing goal will live in my head forever”, as another player of that season like Luca Cacioli said: “Thanks to club for inviting us here, we’re all happy for this historic achievement”. “I don’t know what to say, it’s wonderful to come back here in this stadium, we had the honour to help this club to rebirth. Running to our end has been something special”.

Luca Carra, Parma Calcio CEO: “It’s been an incredible experience, a great satisfaction. I just want to say thanks to all our fans for their support”. Guido Barilla, Nuovo Inizio member of board: “The tears after the win last year in Firenze have been one of the most incredible joy I’ve ever felt in my life. And with this last promotion it’s like we’ve closed a journey. When we presented our project in a press conference three years ago, we said we would have done our best, and we did it”.

After the players who won the Serie D championship, on the Tardini pitch came out those who won the Lega Pro playoffs in the season 2016/17. Davide Giorgino scored a goal into the “derby” against Reggiana: “I didn’t scored many goals but that was an important one: winning the derby gave us a massive boost for the second part of the season, until the playoffs”, as Manuel Nocciolini said: “Scoring in the final last year was one of the greatest emotion in my life, I’m still excited”. Ciccio Corapi: “In that final I was disqualified, and I remember Giorgino running to me after the second goal we scored, because in the previous season I made something similar in the crucial match”.

Then it was the time for the last team, the one that won the Serie B championship, to go on the pitch to celebrate with the Crociati fans. Daniele Faggiano, Parma Calcio sporting manager, said:“This is a huge emotion. Since I came here I felt a big stress for the hard job to do, but we won and we deserve this celebration. We all did our best for this achievement”, as the coach, Roberto D’Aversa, said: “In La Spezia we felt many emotions, we deserve this result for all the work we did, but also this city deserves to be in Serie A. We passed through a very bad moment after the match lost in Empoli, but after that we didn’t gave up and we went on playing. Eighteen months ago this club was a brave one, by giving a job to a young coach like me. I have to say thanks to this club, to the chinese chairman Lizhang, to all the players and the fans. And finally, thanks to my wife”. 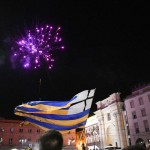 “WE DID IT!”: ALL THE REACTIONS AFTER OUR PROMOTION IN SERIE A