Cesena, 6th May 2018 – After the match lost in Cesena, Coach D’Aversa has met journalists to give his thoughts on the game.

“It’s been a good match, after our goal we had many other chances to score another one and I think that until they draw we did good things on the pitch, in a hard match against a team fighting to avoid relegation, but we conceded a goal in an unlucky situation for us: we would have kicked that ball away from our box. Then we tried to score our second goal, but we conceded another one instead and in the end we had a huge chance to win but we wasted it in a very bad way”.

Even the Crociati midfielder Scavone said something on the game:

“We have no words now, it hurts so much: we wanted to win this game and were about to do it, but we had to score the second goal, trying with some chances, then we had some troubles in the end because we felt exhausted. They scored and we tried to score again, so we played attacking too much so they scored twice and won the game. Now we have to play two more games to the end of the championship: we’ll try to forget this bad game, it won’t be easy and we’ll go on the pitch to win the remaining games”. 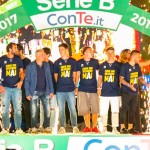